The Real Nature of Love:

Isabella Fiske McFarlin ("Ladybelle Fiske,") has been a writer all her life. Taught first by her father, Irving Fiske, a freelance writer who also worked for the WPA and who translated "Hamlet" into modern English, she has also studied with Scott Russell Sanders, Terry Tempest Williams, Bill Roorbach, and others. She has attended Bread Loaf Writers Conference twice, once with a scholarship from  The Vermont Arts Council.
She also won a competitive Full Fellowship to Vermont Studio Center, and has been published in Vermont Life, The Burlington (VT.)  Free Press, Blogcritics.com, KidsVT!, The Examiner.com, and others. She has also been director of the Free The Kids! Program of the Green Mountain Educational and Cultural Trust, disseminating information on how and why hitting children and denigrating them will leave lasting effects on the psyche and can even produce criminal behavior later in life. Her life has been centered on children's happineess, as well as on creativity. 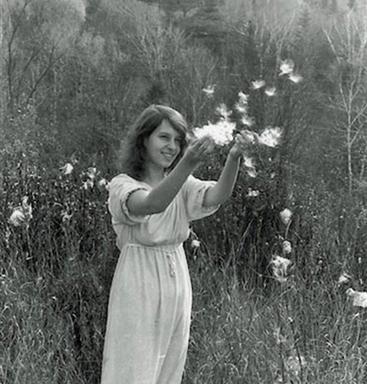 Isabella Fiske (Ladybelle, as she is also known) in around 1970, scattering milkweed  seeds on their silken parachutes